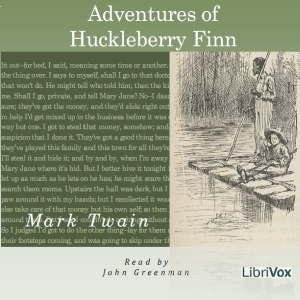 Adventures of Huckleberry Finn (often shortened to Huck Finn) is a novel written by Mark Twain and published in 1884. It is commonly regarded as one of the Great American Novels, and is one of the first major American novels written in the vernacular, characterized by local color regionalism. It is told in the first person by Huckleberry "Huck" Finn, best friend of Tom Sawyer and narrator of two other Twain novels.

The book is noted for its colorful description of people and places along the Mississippi River. By satirizing a Southern antebellum society that was already anachronistic at the time, the book is an often scathing look at entrenched attitudes, particularly racism. The drifting journey of Huck and his friend Jim, a runaway slave, down the Mississippi River on their raft may be one of the most enduring images of escape and freedom in all of American literature.

The book has been popular with young readers since its publication and is taken as a sequel to The Adventures of Tom Sawyer. It has also been the continued object of study by serious literary critics. The book was criticized upon release because of its coarse language, and became even more controversial in the 20th century because of its perceived use of racial stereotypes and because of its frequent use of the racial slur, "nigger." In answer to a critic of his style, Twain once said, "A discriminating irreverence is the creator and protector of human liberty." (Summary by Wikipedia & John Greenman)

Reviewer: dfkinjer - favoritefavoritefavorite - July 24, 2015
Subject: Excellent reading, book is overrated
I read Huck Finn as a kid, and now, much much later decided to listen to it again. I know that as a kid I could not have appreciated the historical context as much as I can now, nor could I have been able to put it in the context of other 19th century literature. The book, in my opinion, is overrated. If I compare to other 19th century literature - English, French, Russian - it just is not as sophisticated. I also wonder at the "humor" of the plot and Jim's "escape". I could see how children at the time might have found Tom's view of the "escape" as merely an adventure, and find it humorous to see how what could have been simple he had to do like he read in books (reminiscent of Don Quixote?), but did Mark Twain find humor in risking Jim's life for Tom's amusement? Though for a moment Huck shows humanity and understands that Jim cares about his wife and children like white people do, but this is fleeting, and lost in the rest of the story. The reader is excellent - I chose his reading because I thought his reading of Uncle Tom's Cabin to be superb. So my three-star rating is because of the book itself. The reader would get 5 stars.

Reviewer: Sayeth - favoritefavoritefavoritefavorite - August 19, 2010
Subject: Free Listens review
John Greenman is a great narrator of Mark Twain. Greenman has the ability to bring out the Midwestern tone of Twain's writing. He delivers the humor without overselling it and has a light breezy style of speech that reflects the conversational style of the book.
For full review and other reviews of free audio, visit www.freelistens.blogspot.com

Uploaded by librivoxbooks on August 27, 2009